When was the last time you had a good belly laugh?

You know the one, where you are rolling around the floor holding your stomach whilst the laughter tears are streaming from your eyes?

When our laughter comes from the core of our being, it permeates every cell in our physical selves, beginning in the centre and radiating outward, until we are not merely belly laughing but rather body laughing.

It’s so easy to laugh when we feel good, but it is when our world turns upside down that we most need laughter in our lives.

After my son Dan’s funeral in 2011, every night for a couple of months, my husband and I would watch our favourite comedy show, Coupling.

Coupling is a 2001 – 2004 British comedy series about two people who get together and bring with them baggage from their past, friends, and ex-partners – people who would never meet under normal circumstances. There are only 28 episodes and all of them are hilarious. Its like Friends though the writing is so much more hilarious.

Did you know that many studies show that “laughing truly is the best medicine?”

Though sometimes it seems that we all take ourselves way too seriously and frown upon people who are laughing, especially after loss of any kind comes into their lives.

It’s like if we are laughing, then we are not taking what has happened seriously………. We did not really love them!

Whereas in fact, laughter assists us to regain our footing in the moment and remember that no sorrow is powerful enough to rob us of our inborn happiness. When we understand that uninhibited laughter is the food of the soul, nourishing us from within, we know instinctively that life is worthwhile.

It assists us to remember that the ability to laugh, play, and have fun with others not only makes life more enjoyable but also helps you solve problems, connect with others, and be more creative. People who incorporate humour and play into their daily lives find that it renews them and all of their relationships.

Laughter is one of the remedies that I always recommend. At the beginning I suggest that you consciously schedule time to laugh. I know you are probably saying “what a silly idea,” though before you dismiss it, first take a look at the benefits of laughter from a mentally, physically, family and socially perspective 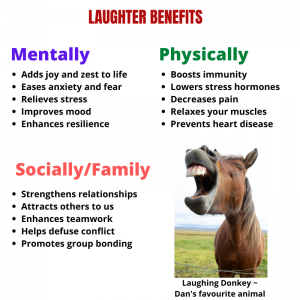 When you look at these benefits, you realise that maybe it’s not such a silly idea.

Afterall, we schedule our time to exercise and for other wellbeing activities, so why not for laughter and all the other things that get our “feel good” hormones running around our body?

Laughter is a great remedy to assist you to climb out the rubble that seems so overwhelming at the moment. It assists you have a different perspective. To help you to feel emotionally better. It helps you to participate in living and loving your life again.

Maybe its time for you to start laughing?

If you are stuck, feeling sad, unable to forgive yourself, unable to laugh, unable to smile, unable to live on your own, maybe it’s time to see what you can do now…

If that’s you, reach out to book a time to chat. 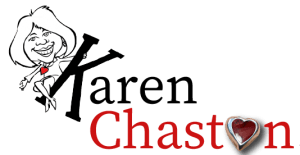 Loss: The most important and hardest thing to do

Finding Your Way After Loss
Scroll to top
50% Complete